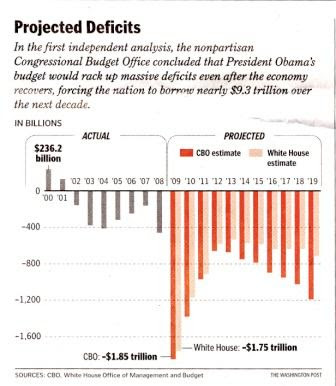 The Obama administration is now agreeing with the CBO on the deficit projection. They were claiming the ten year deficit would be $2 trillion less.

WASHINGTON (Reuters) - The Obama administration will raise its 10-year budget deficit projection to approximately $9 trillion from $7.108 trillion in a report next week, a senior administration official told Reuters on Friday.

The higher deficit figure, based on updated economic data, brings the White House budget office into line with outside estimates and gives further fuel to President Barack Obama's opponents, who say his spending plans are too expensive in light of budget shortfalls.

The White House took heat for sticking with its $7.108 trillion forecast earlier this year after the Congressional Budget Office forecast that deficits between 2010 and 2019 would total $9.1 trillion.

Running the deficit up to record levels is exhausting work. President Obama left this afternoon for a summer vacation at Martha's Vineyard.
Posted by Bluegrass Pundit at 6:41:00 PM