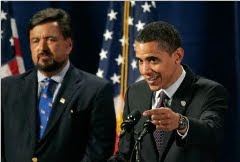 The Department of Justice has dropped the investigation into the "pay for play" allegations against New Mexico Gov. Bill Richardson. The decision was made in Washington.

What do Bill Richardson and the New Black Panther Party have in common? Both got let off the hook by Attorney General Eric Holder and the Obama Department of Justice. Holder, who recently announced a push to investigate and potentially prosecute CIA interrogators, will not prosecute the governor of New Mexico for his pay-for-play activities, which scotched his nomination for Secretary of Commerce:

New Mexico Gov. Bill Richardson and former high-ranking members of his administration won’t be criminally charged in a yearlong federal investigation into pay-to-play allegations involving one of the Democratic governor’s large political donors, someone familiar with the case said.

The decision not to pursue indictments was made by top Justice Department officials, according to a person familiar with the investigation, who asked not to be identified because federal officials had not disclosed results of the probe.

“It’s over. There’s nothing. It was killed in Washington,” the person told The Associated Press.