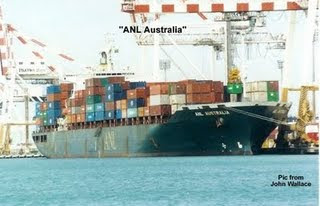 Sanctions against North Korea were ramped up after there last round of missile firing.
This is the first seizure under the stiffer sanctions, which prohibit North Korea fron selling any conventional weapons.

UNITED NATIONS — The United Arab Emirates has seized a cargo ship bound for Iran with a cache of banned rocket-propelled grenades and other arms from North Korea, the first such seizure since sanctions against North Korea were ramped up, diplomats and officials told The Associated Press on Friday.

The seizure earlier this month was carried out in accordance with tough new U.N. Security Council sanctions meant to derail North Korea's nuclear weapons program, but which also ban the North's sale of any conventional arms.

Diplomats identified the vessel as a Bahamas-flagged cargo vessel, the ANL Australia. The diplomats and officials spoke to The Associated Press on condition of anonymity.

"We can confirm that the UAE detained a North Korean vessel containing illicit cargo," a Western diplomat told the AP.

Turkey's deputy U.N. ambassador, Fazli Corman, who chairs the Security Council's sanctions panel, also confirmed the incident without providing details and said council members are examining the seriousness of it.

The UAE, a hub for Iranian goods, seized the ship earlier in August. The ship is registered in the Bahamas, a common country of registry for vessels, but it wasn't immediately clear who owns it nor where the owner is based.

The Security Council's latest resolution came in the wake of North Korea's second nuclear test in May and firing of six short-range rockets.