Was Mossad behind the Russian ship hijacking? 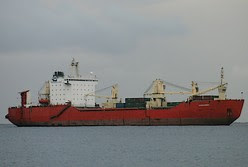 Many foreign newspapers are now reporting that the hijacking of the Russian freighter Arctic Sea was an Israeli secret service operation. Allegedly, the ship was carrying cruise missiles to Iran?

Was Israel's secret service behind the unexplained hijacking of a Russian freighter, to foil a secret attempt to ship cruise missiles to Iran?

The mystery surrounding the hijacking of a Russian freighter in July has taken a new twist with reports claiming the pirates were acting in league with the Mossad in order to halt a shipment of modern weapon systems hidden on board and destined for the Islamic republic.

While Israeli and Russian officials dismissed the reports, accounts published in the Russian media sounded more like a spy thriller than a commercial hijacking.

"There is something fishy about this whole story, no doubt about it," former deputy defense minister Ephraim Sneh told The Media Line. "But I can't comment further on this."

The Russian newspaper Novaya Gazeta reported over the weekend that the vessel Arctic Sea had been carrying x-55 cruise missiles and S300 anti-aircraft rockets hidden in secret compartments among its cargo of timber and sawdust.

The eight hijackers originally claimed to be environmentalists when they boarded the ship in the Baltic Sea in Swedish waters on July 24. The Russian navy tracked it down three weeks later and recaptured it near the West African archipelago of Cape Verde on August 17, thousands of kilometers from its original destination of Algeria.

The hijackers were charged late on Friday with kidnapping and piracy, the Interfax news agency reported. Russian authorities have declined to revealing further information about the suspects' motives.