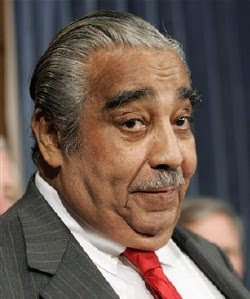 The good times are still rolling for Democrats accused of corruption. Ways and Means Chairman Charlie Rangel has found $1.3 million in previously unreported income. Oh, Really? How do you lose track of $1.3 million? Perhaps it fell out of his pockets into his couch. Nancy Pelosi and members of the Congressional Black Caucus are aren't concerned unless something "insane" comes up. It is unclear what would meet their definition of insane. Rangel has a long history of tax problems. As the nations chief tax writer, he had no problem proposing we pay the largest tax increase in history.

House Democrats are willing to rally around Rep. Charles Rangel in his latest spate of tax missteps -- but only as long as no more embarrassing revelations come to light, sources told The Post.

That's on top of ongoing House Ethics Committee probes into four other areas of Rangel's financial past -- including failure to properly report income taxes on a Caribbean villa he owns.

But unless the Ethics Committee probes hit Rangel with something more than a slap on the wrist -- or a bigger scandal arises -- Democrats are unlikely to push him off the Ways and Means Committee, a Washington insider said.

"He doesn't strike me as someone who would go quietly, and he's not afraid to play the race card on his own party," the DC source said.

Friends like House Speaker Nancy Pelosi, members of the Congressional Black Caucus and the New York delegation are committed to keeping Rangel in place, sources said.

"Unless he's done something absolutely insane that hasn't come out yet, he's protected," said a Democratic official.