Team Obama May Throw "Public Option" Under the Bus 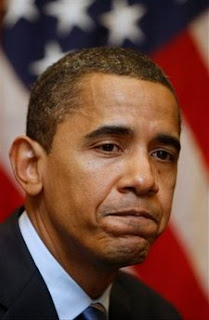 In a move sure to enrage the liberal left, the Obama administration has signaled they are willing to drop a government run heath insurance option from the health care reform bills. Team Obama is getting desperate to salvage anything they can call a victory from the health care reform disaster. However, it may not be Blue Dog Democrats that kill the deal. Liberal Democrats may revolt if the government run "public option" is dropped.

From AP via Yahoo News:

WASHINGTON – President Barack Obama's administration signaled on Sunday it is ready to abandon the idea of giving Americans the option of government-run health insurance as part of his ambitious health care proposal.

Facing mounting opposition to the overhaul, administration officials left open the chance for a compromise with Republicans that would include health insurance cooperatives. Such a concession is likely to enrage his liberal supporters but could deliver Obama a much-needed win on a top domestic priority opposed by GOP lawmakers.

Officials from both political parties reached across the aisle in an effort to find compromises on proposals they left behind when they returned to their districts for an August recess.

Obama has been pressing for the government to run a health insurance organization to help cover the nation's almost 50 million uninsured, but Republicans remain steadfast in arguing against it.

Health and Human Services Secretary Kathleen Sebelius said that government alternative to private health insurance is "not the essential element" of the administration's health care overhaul. The White House would be open to co-ops, she said, a sign that Democrats want a compromise so they can declare a victory on the showdown.

Tort reform ... get rid of the Edwards scam lawyers.

What, exactly, would you want to see in the way of "tort reform"? Answer: you don't know. All you know is that "tort reform" is one of the buzzwords on the rightwingnut talking points list, so you spout it in meaningless ways.

Are there too many lawsuits filed every year? Yep. But how do you limit them? If you are seriously injured by a defective product, are you willing to have YOUR lawsuit get flushed, in the name of "tort reform"? Which cases do you allow, and which do you ot allow?

How exactly would you like to see tort reform work?

I hope you are right, but I think the Dems are hell bent on getting what they want so they are going to try to rebrand this as “co-ops” instead of public option. If we are talking about a different title that means the same thing forget that.
chi 1 flat iron