How is the government run option working out in Great Britain? 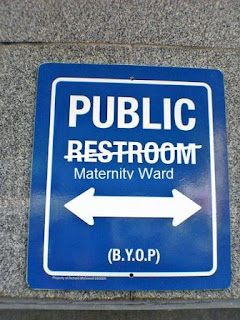 The answer is "not very well," if you are an expectant mother trying to have a baby. There are not enough maternity beds and many mothers in labor are being turned away. Some are having their babies in lobbies and public toilets. Is this the change you want America?

Thousands of women are having to give birth outside maternity wards because of a lack of midwives and hospital beds.

The lives of mothers and babies are being put at risk as births in locations ranging from lifts to toilets - even a caravan - went up 15 per cent last year to almost 4,000.

Health chiefs admit a lack of maternity beds is partly to blame for the crisis, with hundreds of women in labour being turned away from hospitals because they are full.

Latest figures show that over the past two years there were at least:

* 63 births in ambulances and 608 in transit to hospitals;
* 117 births in A&E departments, four in minor injury units and two in medical assessment areas;
* 115 births on other hospital wards and 36 in other unspecified areas including corridors;
* 399 in parts of maternity units other than labour beds, including postnatal and antenatal wards and reception areas.

Babies were born in offices, lifts, toilets and a caravan, according to the Freedom of Information data for 2007 and 2008 from 117 out of 147 trusts which provide maternity services.