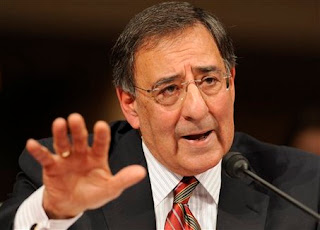 This story is important because even some on the Center/left are now realizing Leon Panetta’s emergency testimony to Congress about an illegal assassination program was a demonstration of incompetence from an inexperienced Director. No laws were broken. The alleged program was little more than a powerepoint presentation and was public knowledge since 2002. Of course, Nancy Pelosi "went off the deep end" and the rest is history.

From The Daily Beast:

CIA Director Leon Panetta’s emergency testimony to Congress about an illegal assassination program has set off a crisis at the spy agency. The Daily Beast’s Joseph Finder exclusively reports that:

• The secret assassination ‘program’ wasn’t much more than a PowerPoint presentation, a task force and a collection of schemes—it never got off the ground

• Panetta’s three immediate predecessors—George Tenet, Porter Goss, and Michael Hayden—have spoken to him, and that he now sees that no laws were broken.

CIA Director Leon Panetta stunned Washington earlier this summer by disclosing, in an emergency closed-door briefing to Congress, that for the last eight years, the agency he now runs illegally concealed a secret terrorist-assassination program. The reaction was predictably explosive. The House intelligence-oversight committee launched a major investigation. Here was official confirmation, from the very top, that the CIA in the Bush years had been flagrantly and systematically violating the National Security Act of 1947.

“If we briefed Congress on every single foreign intelligence collection activity,” one former CIA director tells me, “we’d be a very small intelligence agency attached to a massive congressional briefing agency.”

But according to a half-dozen sources, including several very senior, recently retired CIA officials, clandestine-service officers, and Cabinet-level officials from the Bush administration, the real story is at once more innocent—Panetta was mistaken; no law was broken—and far more troubling: an inexperienced CIA director, unfamiliar with how his vast, complicated agency works, unable to trust senior officials within his own agency, and desperate to keep his hands clean, screwed up.

Leon Panetta was hoping the whole thing would be forgotten, but you can't put the toothpaste back in the tube.

So Panetta ordered an internal CIA inquiry into the matter, headed by a widely respected senior official. In his private conversations with his three predecessors, Panetta “as much as admitted” to them (in the words of one CIA insider) that he’d misunderstood. Without explicitly apologizing, he assured the men—whom he’d in effect accused of breaking the law—not to worry: The whole thing would quietly go away. He told them that he’d been pre-briefed by the officer conducting the internal inquiry, and that when the report came out it would indeed back them up. It would come swaddled in vague banalities calling for improving communication between the CIA and Congress. And the whole thing would die a quiet death.

But of course it didn’t. The bell couldn’t be unrung.

The incompetence of the present administration and it's lackeys is mind boggling....confusing a powerpoint presentation for an actual operation....wowza!

Panetta is simply a guy lost amongst a huge forest. He has no comprehension of the intelligence field or the events going on. This handling of this episode? It's almost comical after the smoke cleared. It was ok to have Panetta step in for six months because of all the screw-ups at the beginning of the administration...but the guy has to go before the end of the year. He'll just keep repeating this mistakes.