The incandescent light is getting turned off 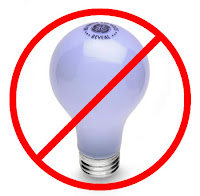 Seventy-two percent of Americans don't want the government telling them what kind of light bulb to use. This is going to happen in spite of consumer opposition because of an energy bill passed in 2007. Americans have about eight years left before the change is fully implemented. The incandescent light has already gone out for Europeans.

Shoppers are stockpiling traditional light bulbs while they still have the chance.

An EU ban comes into force on Tuesday making it illegal for retailers and wholesalers to import most of the old-style bulbs.

It means once stocks have run out, the only ones available will be the more pricey, low energy variety.

Roger King, who runs Hampton Hill Hardware in Middlesex, said: "I've taken orders this week for quantities in the 50s and 100s."

"People don't like being told what to do for a start. Many are concerned that they are not going to be able to see properly with the new type of light because it rapidly diminishes in effectiveness."

Who do Americans have to blame for this government intrusion into our daily lives? Democrats and the companies that will make a fortune selling the new compact fluorescent bulbs advocated this requirement be in the 2007 Energy Bill signed by then President George Bush.

Bloomberg reported:
Posted by Bluegrass Pundit at 5:28:00 AM

I agree, the government should not tell us what we can and can't purchase as far as lightbulbs.

I do hope that people make better choices, though. Incandescent bulbs do waste alot of energy.

Part of the problem is that people are using alot of energy in parts of the country. But, they are trying to ban building of new nuclear reactors in favor of so-called green energy or coal factories which the government can tax the crap out of.

I actually saw a comment on the south Texas reactor say "There is plenty of green energy in texas, why don't we all do our part and buy green?" I can tell you why; the green energy costs a hell of a lot more.

"We can't expect the American people to jump from Capitalism to Communism, but we can assist their elected leaders in giving them small doses of Socialism until they awaken one day to find they have Communism."
Nikita Khrushchev, 1959

Are you that brain dead? Sky News is Brit. The EU is the European Union/

The American government has done NONE of this.

But please, go out and spend your paycheck hoarding incandescent light bulbs......

"Are you that brain dead? Sky News is Brit. The EU is the European Union/

The American government has done NONE of this.

But please, go out and spend your paycheck hoarding incandescent light bulbs......"

We have another eight years to hoard our bulbs or vote in Congressmen with brains.