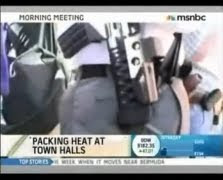 MSNBC has responded to allegations they race-baited by not identifying a man with a gun at an Obama event as an African-American in a segment that discussed the "racial overtones."

Following the shot of the African American man focusing specifically on the gun, MSNBC host Contessa Brewer said that “you have a man of color in the presidency and white people showing up with guns strapped to their waists or to their legs.”…

[B]y raising the racial issue in this context, bloggers claimed that MSNBC was purposely misleading viewers by not showing that at least one African-American man has also carried a gun to an event.

An MSNBC spokesperson responded to POLITICO: “Contessa was speaking generally and not about that specific person with the automatic weapon.”

You can watch the video here and decide if that explanation flies. Americans for Limited Government aren't buying this explanation and have called for those involved to be fired. I agree.

On behalf of the nearly half million members of Americans for Limited Government — and tens of millions of other equally appalled Americans of all races nationwide — I hereby demand the immediate termination of Contessa Brewer, Toure, Dylan Ratigan and any and all others involved in any way with the fraudulent “news” that ran in the 10:45AM segment of your August 18 broadcast.

You network has besmirched the dignity and honor of American people. You have endangered the life of the President of the United States. You have purposely fanned racial tensions. And you have deliberately lied to your own audience.

If MSNBC wasn't so comical, I'd suggest they get the boot. It's amazing how many moonbats quote these guys.

Hi BP: I agree, this was deliberate and all those involved should be fired!
These lib MSM ho's for o have no shame!
Another disgusting display of Pravda in action.
Thanks for telling us about this.