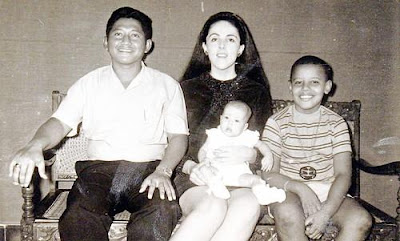 The evidence would indicate young Barack Hussein Obama was adopted by Indonesian citizen Lolo Soetoro after Soetoro and Obama's mother were married. The most convincing evidence is the Hawaii divorce papers filed in 1980 as Stanley Ann Soetoro vs. Lolo Soetoro. This document lists the couple as having two children. One is under the age of eighteen. That would be Maya Soetoro who was born in 1970. The other child is listed as over eighteen and in need of educational support. That would be Barry Soeroto (Barack Hussein Obama.) There are no other known children related to this marriage. 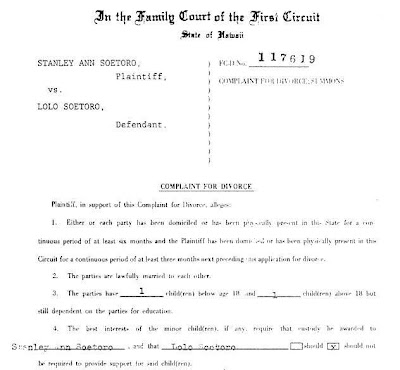 From the Official Occidental College blog:

It was at Occidental where he stopped being called “Barry” and became Barack Obama, Newsweek pointed out in its account of Obama’s formative years that featured his black-and-white freshman photo on the cover. “It was when I made a conscious decision: I want to grow up,” he told the magazine.

This combination of evidence strongly supports the fact that Barack Hussein Obama was adopted and became an Indonesian citizen for several years.

Does this mean Barack Obama is not a natural born citizen under the Constitution? That is a difficult question. Conservative Brawler has a great analysis. You should visit his site and read the whole analysis. I have excerpted a key part below.

From the perspective of current law, there is no suggestion that Obama would have been stripped of his US citizenship. He would have, under section 6 (1-3) of the Indonesian citizenship law, had to issue a written denunciation to Indonesia of either his Indonesian or American nationality sometime between is 18th and 21st birthday. Did he do it? Who knows, the man won't release his records!

If 'a' then either Obama or Indonesia should have the records to prove it. If 'b' then, according to INA § 349, 8 USC § 1481, Obama isn't even an American citizen, let-alone "natural-born." If 'c' then he's facing a whole world of legal troubles and scandal. But let's assume he did 'a.' If he waited until he was 21 to file his papers with Indonesia, that would certainly explain the rumors about his using an Indonesian passport to get into Pakistan in 1981. That's a pretty big "if," though. And if this is what Obama did, then he and Indonesia would have the records to prove it.

Where are original birth certificates kept?


If adoption by an Indonesian citizen is the reason President Obama is hiding his college and birth records, he will never willingly release them. The release would open up questions about his "natural born" status and could cause people to question his loyalty based on his time as an Indonesian citizen.
Posted by Bluegrass Pundit at 12:54:00 PM

Thanks for the reference!

"Thanks for the reference!"

You are welcome. I recommend all my readers visit your blog too.

But didn't all adoption records with regard to 0bama automatically become unsealed without requiring a court order when all signatory parties were declared deceased? Stanley Ann Dunham died on 7 November 1995 and Lolo Soetoro died on 2 March 1987.

0bama has stressed, ad nauseum and quite eloquently, his priority is to work within the legal confines of the law. Why then does he balk at releasing whatever documents are available that would settle the question of whether he is legally eligible to serve as POTUS?

"But didn't all adoption records with regard to 0bama automatically become unsealed without requiring a court order when all signatory parties were declared deceased?"

I believe only a court order can unseal adoption records. I can't find any other information. Do you have a link to the site where you say that info?

And when you are a "foreign citizen", and plan on living in your home country, you are offered the option to change the infants citizenship to that of your adopting country, Indonesia. This is done once the adoption of a US citizen by a foreign national is accepted.

It is a matter of formality, to change the infants citizenship, and since Indonesia doesn't allow dual citizenship, it seems only reasonable that Barry was adopted and became automatically an Indonesian citizen.

This would explain also why young Barry was allowed to go to Pakistan, at a time when US citizens were barred from doing so.

And little Barry, being raised in Indonesia has a decidedly distinct Indonesian view of the USA and it's 57 States.

"And little Barry, being raised in Indonesia has a decidedly distinct Indonesian view of the USA and it's 57 States."

We should never forget the 57 state gaffe. That was hilarious.

You did an excellent job of breaking down the birth certificate issue. It was very interesting.

Interesting the things people have to resort to now that you can no longer just burn crosses on other peoples' front yards.

Here's a suggestion: try exploring the irregularities surrounding the passing of the 13th Amendment. Maybe you'll discover some "we don't actually have evidence but who needs that in the age of the internet?" that suggests that Obama is actually owned by the same Urban Hillbillies that have been promoting these ridiculous stories over the past several weeks.

I never thought birth of Obama will become such a big discussion topic. I am following this closely to see where this conspiracy ends. Meanwhile I have collected some good articles and sites related to Barack Obama (more than 200 sites or articles). If you are interested take a look at the below link
http://markthispage.blogspot.com/2009/06/how-do-i-get-information-about-barack.html

If he was legally adopted by Lolo Soetoro and the marriage between his mom and step dad legal, in order to get recognation as legal marriage in Indonesia before 1974 must be seen under Regeling op de Gemengde Huwelijken. 1898 No. 23) S. 1898 -158. And when his step dad and his mom divorced and this event happened after 1974 then in order to get the divorce be recognized by Indonesian authority will be under UU No.1 tahun 1974.
Here's the interesting point that if the marriage and adoption process were legal then he according to Indonesian law must be an Indonesian citizen.

His defender always hide by using the article 2 and article 17 section e while if I translate my self this shall seen like this:e.Announced los the citizenship by Justice minister with agreement of Minister Board on behalf of that person after he/se was 21 years old, stay outside Indonesia and therefore by declared lost Indonesian citizenship shall never be a state less citizen.
If your lawyer smart enough to prove either he is natural born or not, well stressed to the court this out:
According to Indonesian law he is/was an Indonesian but since US law supreme under US law and not Indonesian soil and vice versa therefore according to our law he had dual nationality.
Why he always escape despite this facts were real is because US plaintiff seek that Indonesian law can annulled his US citizenship; this true if he stay until now in Indonesian soil but if the plaintiff smart enough to restrain a little bit then the plaintiff can get him by the fact of dual nationality according to US law. This is what he and his family afraid the most!!!